How Hot was it This Summer and Will That Affect Fall Leaf Color?

This past week, the High Country was impacted by the remnants of Tropical Storm Lee. Anywhere from 2-9" of rain was dumped on the area between Monday and Wednesday, with most of it falling on Tuesday. Creeks overflowed their banks, and one couple was trapped in their car near the mall and had to be rescued by the fire department, an event recorded and broadcast on HLN! Meanwhile, in Texas, there was no relief from the long drought that has devastated the state. In fact, the wind motion of Lee kept any significant rainfall out of that state. As a result of the lack of rain and high temperatures, Texas is experiencing one of its worst fire seasons in recent history.

In retrospect, this year has had some of the most extreme and expensive weather events in recent memory. April hosted a spate of tornadoes that took the lives of over 540 people. Hurricane Irene walloped the east coast with high winds and rain, causing beach erosion and flooding states from North Carolina all the way up to Vermont, while Lee flooded much of the east coast yet again. All told, there have been a record 11 events this year that have caused at least $1 billion in damage, not counting Tropical Storm Lee. Without Lee or Irene, damage estimates ranged as high as $35 billion, and with much of the hurricane season yet to come, there could be more weather disasters in store for the United States.

All of this makes some people think that these severe weather events are the result of anthropogenic (human caused) climate change. In some cases this might be true. For example, one of the predictions of climatologists is that global warming will lead to more intense storms, and will alter precipitation patterns so that they fall in fewer, but more severe deluges.

But it is also true that this could simply be an aberrant year which would have happened global change notwithstanding. Now, when I say that, I am not suggesting that human-induced climate change is not taking place. I am a strong supporter of the fact that human activities are changing the climate (and perhaps the weather). Anyone who thinks otherwise goes against the majority of climate and atmospheric scientists, and is out of the mainstream.

So, when I state that any particular year could be unusual due to natural weather anomalies, I'm stating a statistical fact that all meteorologists know about, which is that if you take any one year it can appear quite unusual compared to the long term average. In fact, if you were to randomly select any single year's total precipitation amount and then compare it to the long-term average, you would most often find that it did not mirror the long-term "average" rainfall. Any single year will most likely be either above or below that average. But if you were to select a range of years, or randomly grab any group of 10-20 years of data, their average would more closely approximate the long-term average. Such long-term patterns constitute climate, and in fact, the best way to define climate would be to say that it is the long-term average weather.

Now, for many of us, this past summer seemed to be unusually hot and dry. But was it? Did we break any long-term weather records in the High Country? And if so, what might be the effect on fall foliage color? That is the aim this week's fall color science essay. And for helping out with obtaining and analyzing the weather records for this essay, I would like to acknowledge the assistance of Ginger Kelly, an adjunct instructor at Appalachian State University and also an outreach coordinator with AppalAIR, the Appalachian Atmospheric Interdisciplinary Research Program, and Dr. Baker Perry, Assistant Professor in the Department of Geography and Planning and also a founding member of AppalAIR.

Well, your perceptions were right: this was a warm summer, but it was nowhere near what we had last year, which was the second hottest on record. This past summer ranked as only the 15th hottest in the last 82 years. The hottest was back in 1941. However, we did break three summer temperature records. On June 1st we reached 86oF, which broke a record. We set a new record high minimum of 67oF on July 13th: that is, the temperature at night remained elevated at a record high. In contrast to these heat records, just three days later, on July 16th, we set a new record for the lowest maximum daily temperature (just 60oF), which shows just how rapidly temperatures can change in the High Country. These were the only records set this summer. Yet, it felt like one of the hottest summers ever. What else was going on?

If you tally up the number of days that had temperatures at or above 80oF, then this summer was highly unusual. For June, July and August (JJA), we had 7.7, 8 and 2.9 more days, respectively, with temperatures above this threshold than normal (based on 1981-2010 temperatures). This ranked June as the 10th and July as the 14th for the most number of days with temperatures 80oF or higher. That's a high rank, but it also shows that there have been much hotter summers in the past.

What about precipitation? Lots of us thought we had below average precipitation and in fact, the JJA precipitation this summer was 11.54", over 8" below the recent 30 year average of 19.77". However, despite this lower than average rainfall, we were not in an official drought situation. Drought is monitored by the U.S. Geological Survey and one of the metrics the USGS uses to assess drought is known as the Palmer Drought Severity Index (PDSI). This index takes into consideration precipitation and soil characteristics that affect soil water storage, and rates an area in terms of the severity of drought. Positive values indicate an excess of soil moisture, while negative values indicate a lack of it. For the months of JJ and early August, Watauga County was rated "abnormally dry". This is the rating condition just before the declaration of official drought status. Figures 1 and 2 show the drought conditions for North Carolina as of early September. Note that the PDSI only became negative in August, and even at that, did not reach extreme values. With the recent deluge from Lee, the High Country is no longer in a drought situation. 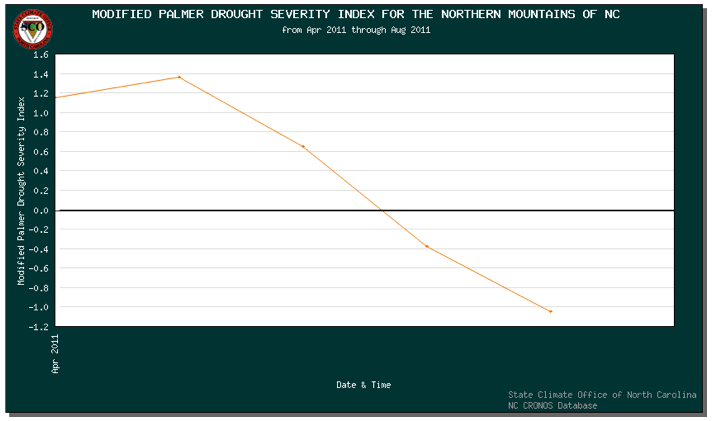 Figure 2. Monthly Averaged Modified Palmer Drought Severity Index for the Mountains of North Carolina from April through August, 2011. Note that the mPDSI was slightly positive in April, May and June, but then dropped in July and August (last two points). The mPDSI can range from +6 (excess soil moisture) to -6 (severe drought). From State Climate Office of North Carolina, North Carolina State University.

So, what does all this portend for fall colors this year? Last year, the second hottest and one of the driest on record, had substantial drought, and was characterized by unusually abrupt leaf loss by yellow poplars, as well as a very short duration of the intense red colors that many people find so pleasing to the eye. There is some thought that moderate drought can intensify fall leaf colors, but in reality this is all anecdotal. There are no scientific studies of the weather factors that lead to good fall color. This does not mean that drought might indeed highlight some fall color, but we simply haven't done any controlled studies to test this hypothesis.

On a recent trip to Charlotte, I did notice widespread yellowing and browning of tulip poplar leaves on the stretch of U.S. 321 between Blowing Rock and Lenoir. I believe this is evidence of drought, rather than premature fall foliage display, since tulip poplar is sensitive to water stress and responds by losing leaves in this fashion. Interestingly, such leaf drop is not apparent in the High Country around Boone, indicating perhaps that at the higher elevations there was less drought stress.

Therefore, since temperatures were not overly high, and our summer drought (now over) was only moderate, I am predicting that we should have good fall foliage colors in the coming weeks. Kathy Mathews, the leaf color predictor from Western Carolina University, has also made a similar prognostication. And so far, our weather is cooperating: we have had cooler temperatures, much sun, and cool nights – conditions expected to continue for the near future and which lead to the development of good fall color.

For those of you planning a trip to the High Country to see the fall foliage, and to get apple cider from the mountain orchards, have a safe trip up. In a future essay, I will discuss why apple orchards tend to be located between 2,000 and 4,000' in elevation, and not higher or lower.