A cool front came through late Friday evening, socking in the mountains in a cloud/fog (fog is just a cloud on the ground). There wasn't much rain with this front, but temperatures did drop about 20 degrees. However, the night time lows didn't get as low as I would have liked them to due to the persistent cloud cover, which traps heat close to the ground. Nonetheless, these lower temperatures are very welcome. I would like to see them drop even further.

Colors are starting in isolated locations. The ridges below Stack Rock, on the east flank of Grandfather Mt., are showing some nice color development, but are not yet at peak color. The same can be said for the northwest slopes below Elk Knob, north of Boone.

High ridges along the Parkway are showing the beginnings of color. Had the temperatures dropped 10 degrees more, I would be saying peak color would start at or right after this coming weekend, but the temperatures didn't, and now I think peak color will occur mid- to late-next week (from Oct 15 on). 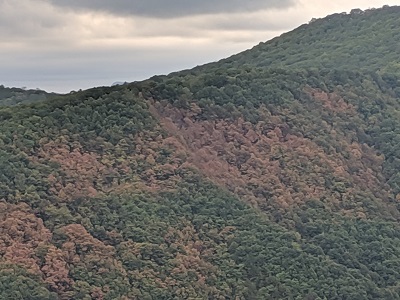 Some high ridges are showing large bands of brown leaves, something I have never seen before. These bands are, I think, the effects of the prolonged drought. I haven't been able to get to these sites to confirm which species of trees are doing this, but I would suspect buckeyes and oaks, perhaps chestnut oaks, since these are common on those high ridge sites.

Lower elevations though, are still quite green, so I'm hopeful that with this cool weather we will see a speed up in color development there.

At Craggy Gardens, the Mt. Ash trees were in full fruit. The buckeyes were turning yellow/orange, while the beeches were browning up. The birch trees were yellowing and losing their leaves. At Mt. Mitchell, the lower slopes were still mostly green, with a hint of color from yellowing birches and orange/red maples, plus some sourwoods. Of course, the uppermost elevations are evergreen, covered in spruce and fir, so you don't see as much color at the top.

As you can see in the album,  the view from my car along the Parkway, at elevations around 5,000' and higher, are still mostly green, with some yellow and scattered red. Still have a way to go for peak color.

So, in summary, colors are starting, but I think we'll be about 5 days later than normal, meaning peak colors may arrive around Oct 15-20. Will the colors be bright this year? Too soon to tell but the beginning colors at Stack Rock were fairly bright, so maybe that is a good sign that other sites will also color up nicely this year.

So, if you're headed up here on the coming weekend, it should be nice if not quite at peak. And if you are going to Grandfather Mt. this next weekend, remember, there will be large crowds, so either go early or be prepared to wait to get in. And in a shameless plug, I will be giving a short 20 min talk on the science and natural history of fall colors in the Nature Museum on Oct. 12, Sat, at 2 pm. Enjoy and drive safely!