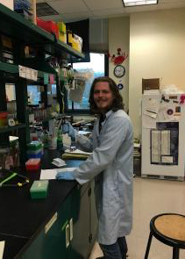 I have always had an interest in biology. I recall during my late teenage years admiring the fascinating ways by which parasites and toxins wreak havoc on the human body through the TV show, House M.D. During the final years of my undergraduate education, through courses such as biochemistry and molecular biology, I came to appreciate the more intimate relationship between life and the molecular interactions which govern it.

Why did you pick ASU for your graduate degree?

I chose ASU for my graduate degree primarily because I had already established a professional relationship with my future principal investigator, Dr. Ece Karatan, and thoroughly enjoyed the work I performed in her lab during my final semester of undergraduate studies. Additionally, the high country is beautiful, and I wasn't quite ready to leave.

What is your thesis research focused on?

Vibrio cholerae is the human pathogen that causes the severe disease, cholera, killing 3-5 million people annually. During interepidemic periods, V. cholerae is thought to persist in aquatic environments primarily in surface attached communities known as biofilms. My research focus is on elucidating how V. cholerae biofilm formation is influenced in response to a class of ubiquitous molecules known as polyamines. Specifically, norspermidine has been shown to enhance biofilm formation and is produced by several aquatic organisms on which V. cholerae is known to form biofilms. In contrast, spermidine is produced in the human intestine and favors a free-swimming lifestyle necessary for virulence factor production leading to cholera symptoms. Polyamine signal transmission occurs through a novel two-protein system comprised of the periplasmic polyamine-binding protein, NspS, and a transmembrane enzyme, MbaA. The goal of my research is to use biochemical analyses to determine the precise mechanisms by which polyamines influence biofilm formation through the NspS-MbaA pathway from signal input through to transcriptional and phenotypic output.

What are your plans after you finish your Master's degree here?

Once I have finished my Master's degree, I will continue doing biochemical- and molecular-based research in a PhD program. It's far too much fun unravelling the mysteries of life to give up this line of work anytime soon. 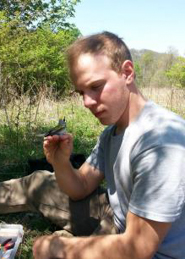 I came to Appalachian State University to study environmental science because I've always had the passion for the outdoors and preserving it for future scientists. I developed an interest in biology specifically after taking an introductory biology course with Dr. Coleman McCleneghan. Every cellular process that lead to the development of organisms and how they interacted with one another fascinated me. I later took Ornithology with Dr. Lynn Siefferman, and from there, I developed my current interest in avian behavioral ecology. I found that almost every major ecological and evolutionary question could be asked and studied in avian taxa.

Why did you pick ASU for your graduate degree?

The largest reason for choosing App State for my graduate degree was to work under Dr. Lynn Siefferman. I had started to develop my research skills as an undergraduate advisee under her, but I wanted to continue this experience throughout my Master's. I love the area surrounding Boone for field-based avian research. My research allowed me to conduct research on some of the most beautiful field sites I could have imagined. Additionally, these mountains are some of the few areas of NC where my study species occur, making it a perfect opportunity to study a rare bird in the High Country.

What is your thesis research focused on?

My thesis research is focused on determining the stimulus of aggressive behaviors between two wood warbler species: golden-winged (Vermivora chrysoptera) and chestnut-sided warblers (Setophaga pensylvanica). These warblers frequently engage in agonistic interactions, but these behaviors have been undocumented throughout their breeding range. The aims of my research are to understand if aggression between these birds is a result of misidentification or an underlying niche overlap (i.e., interspecific competition).

I used museum and field data and used both ecological modeling and experimental field methods to investigate the cause of interspecific aggression. First, I used spectral reflectance data combined with a model of avian vision of museum study skins to determine if misidentification of crown feathers could occur. I found that the crown plumages of both warblers are two distinct shades of yellow that both warbler species should theoretically be able to distinguish. 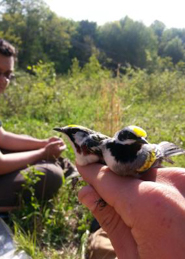 Next, I studied these warblers for two field seasons. First, I investigated whether golden-winged warblers suffered fitness consequences of sympatry with high densities of chestnut-sided warblers (summer 2014). Second, I investigated whether each species was misidentifying heterospecific models as conspecific intruders (summer 2015). I found that golden-winged warblers were more aggressive when settling in areas of high chestnut-sided warbler density, but heterospecifics did not have a negative influence on their overall reproductive success. Instead, I found that the structure of territory habitat best predicted reproductive success. These results suggest that interspecific competition for limited resources is unlikely to be the cause of agonism between the two species. Next, using models of birds presented to territorial birds in the field, I found that both warblers were equally likely to attack the 'correct' (conspecific) and 'incorrect' (heterospecific) model and that the individuals that were more likely to attack the heterospecific model displayed more aggressive phenotypes. These results suggest that, from the perspective of the golden-winged warbler, competition is unlikely to occur and interspecific aggression is a function of mistaken identity.

What are your plans after you finish your Master's degree here?

My plans are to pursue a PhD program starting in fall 2016 to continue my research interest behavior, communication, and interspecific interactions. I have currently applied to Cornell University, the University of Massachusetts Amherst, the University of Colorado Boulder, and Tulane University. As I wait to begin my PhD (spring 2016), I will spend one additional semester at Appalachian State University in order to write up and publish various side-projects I have started with undergraduate researchers. Depending on when I begin my PhD field work, I may conduct one more additional field season on my focal warblers in order to answer lingering questions left over from my Master's research. 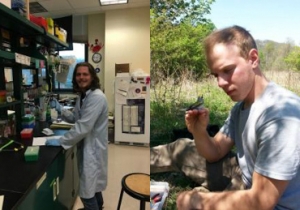 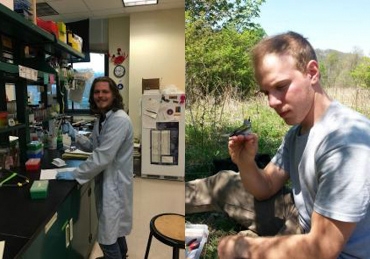