Elisabeth Panto will be working for 9 weeks this summer at the Jet Propulsion Laboratory (JPL), with an initial preparatory week at the Astronomy & Astrophysics Research Lab at the NC Museum of Natural Sciences (NCMNS). She will be working on experiments as part of the new NASA research grant, "Investigating Carbon Inheritance in the Early Solar Nebula: An Interdisciplinary Approach" (PI, Dr. Rachel Smith, ASU, Physics & Astronomy/NCMNS). This project explores the evolution of carbon in young forming stars via investigating the exchange of 12C and 13C isotopes between the ice and gas that may eventually be incorporated into planets and/or prebiotic molecules. Elisabeth is one of two ASU interns hired to work on the project's interstellar ice experiments led by grant co-Investigator Dr. Murthy Gudipati, principal scientist and director of JPL's state-of-the-art Ice Spectroscopy Laboratory. Elisabeth will be involved in all aspects of the lab experiments aimed at exploring carbon isotope chemistry between CO and CO2 gas and ices, with tasks including the preparation of interstellar ice analogs containing CO, CO2, and H2O at temperatures between 10 and 30 Kelvin and pressures less than 10−9 mbar -- conditions which mimic those in astrophysical settings as closely as can be currently achieved in today's laboratories specializing in interstellar chemistry. Various spectroscopic techniques will be used to evaluate the ice and gas mixtures. Results from these experiments will interface with the project's astronomical observations (led by Smith), and theoretical modeling (led by co-Investigator Dr. Karen Willacy [JPL]). Elisabeth will also participate in project collaborator Dr. Geoff Blake's astrochemistry group meetings at Caltech this summer, sharing the experimental results with his students and post-docs.

Above Photo: Elisabeth Panto outside the Astronomy & Astrophysics Research Lab (not shown), at the North Carolina Museum of Natural Sciences, where she interned with Dr. Rachel Smith this past summer on meteorite imaging and curation. Shown at right is the Gibeon iron meteorite. 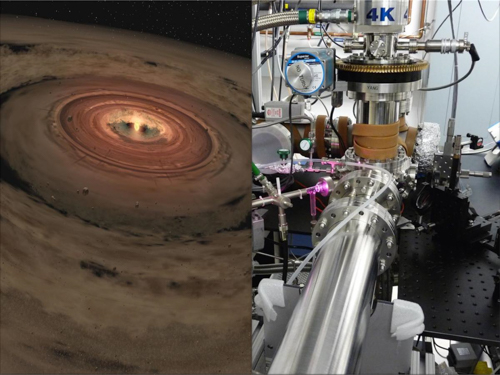 Left: Artist's rendering of a protoplanetary disk, showing a forming young star surrounded by the gas and dust which will likely form planets after ~ one million years. In Dr. Murthy Gudipati's Ice Spectroscopy Lab at JPL, the complex chemistry of these systems is studied via experiments with molecular analogs of interstellar ice and gas. These experiments are carried out with an array of customized, state-of-the-art equipment such as the mass spectrometer shown in the image on the right, which can analyze a wide variety of organic solids and gases, including CO and CO2 that will be the focus of this summer project. Experiments are done at very low pressures and temperatures in order to mimic protoplanetary systems as closely as possible. Image credit: NASA/JPL-Caltech. Link to press release: https://www.jpl.nasa.gov/spaceimages/details.php?id=PIA15805 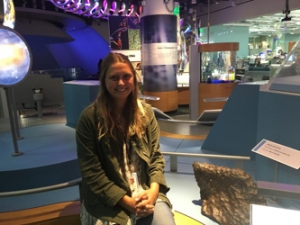 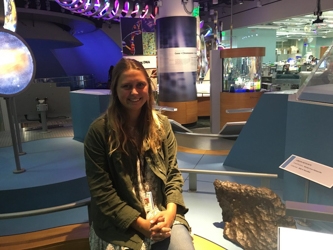