Department of Biology graduate students Gita Gajjar and Amanda Wilkinson won awards in the recent Three Minute Thesis (3MT) competition. The 3MT is an international competition for graduate students to explain their research or scholarly/creative projects in standard non-disciplinary English to a general audience (the public) in 3 minutes with the help of only one static PowerPoint slide. Appalachian's competition had a total of 32 participants.

Amanda won the People's Choice award, which includes a $250 travel/research award. She works in Dr. Matt Estep’s lab to improve modern understandings of relatedness within the snail Neohelix genus. Wilkinson is from Denver, N.C. and earned her Bachelor's from Appalachian in 2017. Before returning to Appalachian for graduate school, Amanda worked in a lab and also volunteered at the Schiele Nature Museum.

Gita won First Place, which includes a $750 travel/research award. Gita and her faculty mentor, Dr. Andrew Bellemer,  will travel to Knoxville, TN in late February to compete at the regional 3MT competition hosted by the Conference of Southern Graduate Schools.  Dr. Bellemer's lab studies nociception in neurons that cause the state of chronic pain and mechanisms of protein synthesis that are known to be present in the state of chronic pain. They use Drosophila melanogaster – fruit flies – as the model organism as it has more than 60% homology with the human genes. This makes any study done on the flies applicable to the humans. The title of Gita's talk was "Role of Thor  in Drosophila pain". Gita is from Kenya and taught Biology before deciding to return to school to do research, and plans to go on to a PhD. program. Gita also has a Master in Project Planning and Management.

Both Amanda and Gita will also be honored at the spring Graduate Student Awards reception and will travel in May to represent Appalachian at Graduate Education Day in the Capital in Raleigh. 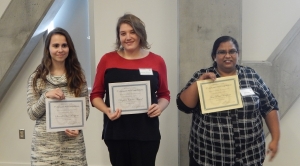 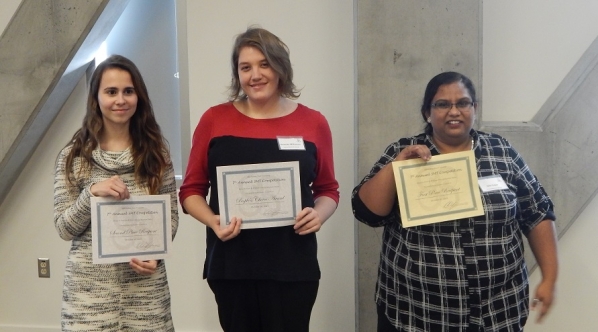