My first and greatest scientific love was in the field of embryolgy and developmental biology but my research career has been marked by several distinct shifts in interest. Early work included the effects of a teratogen (LiCl) on the development of mollusc embryos and an electron microscopical investigation of spermatogenesis, oogenesis and fertilization in anthozoans. Subsequently, teamed with my wife, I have ranged from studies on the comparative fine structure of tardigrades to fungal infections of tardigrades and early metazoan evolution.

More recently my research has focused on the developmental neuroanatomy of the notostracan crustacean, Triops.This organism has a very uncondensed nervous system that is thought to resemble the primitive condition for crustaceans if not all arthropods and is an ideal organism to use for comparing the nervous systems of arthropods and tardigrades. Such comparative studies can be used to determine the critical transformations that must have occurred in the evolution of the arthropod head after the origin of tardigrade-like organisms. This information indicates that the arthropod head has had a complex evolutionary history. Critical portions of the transformation appear to have occurred within the anomalocarids, a group predating modern arthropods, and to have entailed the rotation and elongation of the mouth cone or "Peytoia." The model that we have developed postulates that the backward rotation of the mouth resulted in the development of two significant features of arthropods. First, the rearward shift of the mouth brought the stomodeal system and a posterior pair of ganglia of the ventral chain into juxtaposition and created the tritocerebrum, an important neuromere in the brain of advanced arthropods such as insects. Secondly, the newly formed ventral surface of the posteriorly curved cone became sclerotized forming the hypostome. Later, in the stem group of crustaceans, the hypostome developed a caudal lobe that has become the labrum of modern crustaceans as well as insects. This complex transformation of the mouth cone is concordant with what is known about the development of gnathobasic feeding in the Lower Cambrian. It is also congruent with the patterns of expression of engrailed and other genes during arthropod development and underscores the need to incorporate the early and complex history of these organisms into the interpretation of molecular data. 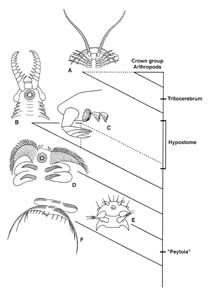 A phylogenetic tree illustrating the transformation of a simple mouth cone into the complex feeding apparatus of arthropods. Three key transitions in the development of the hypostome are given and possible origins for the hypostome and tritocerebrum are indicated. 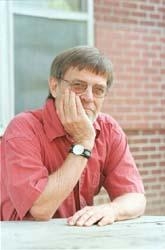