The present research effort in my laboratory focuses on the effects of a possible neurotrophic factor on central and peripheral nervous system repair after injury. Studies have shown that the adult nervous system of higher vertebrates has some capacity for regeneration or reorganization after damage. The establishment of functional regeneration of damaged neuronal tissue may require the reactivation of cellular developmental signals and genetic programs expressed earlier in development. Neurotrophic factors are believed to play an active part in the re-connection, growth and guidance of remaining neurons to establish functional recovery. It has also been noted that the consequences observed in the removal or absence of these factors resemble many of the degenerative changes seen in human diseases such as Parkinson's and Alzheimer's disease. There is a very good possibility that neurotrophic factors may be used for therapeutic intervention in traumatic or vascular nervous system damage. A substance which appears to meet several of the criteria of a neurotrophic factor is 1,1,3,-tricyano-2-amino-1-propene (Triap). In recent studies Triap has been shown to increase the rate of nerve and tissue regeneration in in vitro and in vivo neural preparations. Triap accelerates limb regeneration in newts, induces neurite formation in chick spinal ganglia and neurite outgrowth in PC 12 cells, and induces choline acetyltransferase (CHAT) activity in the CNS of adult animals and in primary fetal brain cells. Our primary research interest is to study the effects of Triap on recovery of motor function after sciatic nerve injury in the rat and on functional recovery of motor behavior in the rat after induced brain injury. The goal of this research is to see if Triap could be used as a neurotrophic agent in enhancing functional recovery in neural systems after damage.

Past research efforts in my laboratory have included the study of vertebrate spinal cord interneuron morphology, a morphometric analysis of the developing bullfrog sciatic nerve, a study of recovery of locomotor function following complete spinal cord transection in bullfrog tadpoles, a study of biocompatibility of polythiophene-coated electrodes with neural tissue and a study of the neurophysiology and neuromorphology of two sympatric species of scorpions. Research projects in my laboratory often focus on the particular interests of the students. 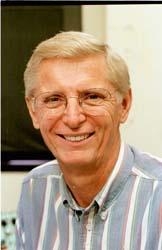