I am interested in reproductive behaviors, the evolution of sexually selected traits, life history evolution & animal coloration as well as applying tools from molecular biology, endrocrinology, & immunology tools to question in behavioral ecology and conservation biology.

One of my primary research interests is the function and evolution of plumage colaration in the eastern bluebird (Sialia sialis). Eastern bluebirds are a model system within which to investigate sexual selection and mate choice because they readily use nest boxes, breed repeatedly in the same location, and tolerate considerable disturbance at the nest. Working with Geoff Hill (Auburn U.), we have found several lines of evidence suggest that blue structural plumage of eastern bluebirds is an important sexually-selected signal. Experiments indicate that more colorful males are better able to secure nest boxes, and limiting resources for cavity nesting species. Field correlations show that bluebirds that are more ornamented gain higher reproductive success. Honest advertisement models of sexual selection assume that production of a reliable ornament depends on both the phenotypic condition and the underlying genotype of the bearer. Understanding the relative importance of genes, environment, and the condition-dependent nature of an ornamental trait is fundamental to investigating how a trait acts as an indicator of fitness. With Joel McGlothlin (U. Virginia), I am estimating the relative importance of genes, environment and gene-by-environment interactions on the expression of plumage blueness.

I am also interested in how sexually selected morphology (body size and plumage coloration) interacts with the steroid hormone testosterone, which mediates mating behaviors and tradeoffs. I am currently studying individual variation in the production of short-term testosterone increase, which is induced by aggressive social interactions. I am investigating whether these changes are associated with territorial and parenting behaviors. With Kristen Navara (U. Georgia), Iinvestigated how socially stressful conditions experienced by female bluebirds during egg laying affected their circulating levels of androgens and the amount of androgens transferred to the eggs. In collaboration with Ellen Ketterson (Indiana U.), we are now investigating the long-term effects of yolk androgens on offspring fitness and adult behavioral syndromes.

I am also interested in Conservation biology. Freshwater mussels (Bivalvia:Unionoida) are perhaps the most imperiled group of freshwater invertevrates in the world. Rivers of southeastern North Americal support diverse mussel assemblages, including more than 2/3 of the continent's unionid species. Unfortunately, many species are difficult to recognize using shell characteristics. With Mike Gangloff (ASU), I am using molecular and nuclear DNA to resolve species boundaries within the freshwater mussel genus Elliptio. 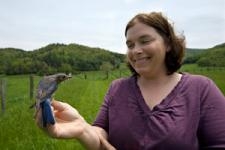